Don’t forget we have daily tours at 2pm (meet at great Glasshouse at the National Botanic Garden of Wales) and we have a video blog at http://www.youtube.com/user/MiddletonDig?feature=mhee. So come and visit or keep up to date online if you can’t make it!

Don’t forget to check out our video blog at http://www.youtube.com/user/MiddletonDig?feature=mhee where you can see us talking about what we have found so far!

Jon is a great big 23 today! All grown up! But this didn’t mean that we took the day off to celebrate – we got on with more digging in the glorious sunshine and ate cake in our break times.

In Ed’s half of the trench they continued digging down into the robber trench and found various artefacts such as glass and pottery fragments and iron nails.

At the other end of the trench we had reached the bottom of the robber trench – we found subsoil and bedrock which are both natural geological features. By finding these we knew that no more archaeology was going to emerge further down. We did, however, manage to expose the whole of the rock that we found on Saturday and we discovered that in order to remove the wall stones from the trench Paxton’s workers had undercut (dug at an angle beneath) the cobbles resulting in a rather extreme overhang. You can see both the rock and the overhang in the image below. It appears that the large rock that we discovered had been moved slightly but left behind, therefore it is not in situ (where it was originally) however it is a clear indication that the feature we were digging is indeed a robber trench and not another feature such as a ditch. 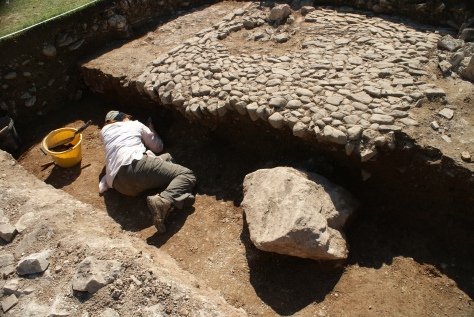 Rhian cleaning the section edge under the overhanging cobbles, and a large foundation stone#

And to top off a fantastic day’s digging we had around 40 visitors who came to see how we were doing!

The tent is still up, it hasn’t rained for a couple of days and we all arrived on site ready to continue removing soil from the robber trench in order to find the bottom. We got on with heavy digging with mattocks and worked steadily down through the soil. 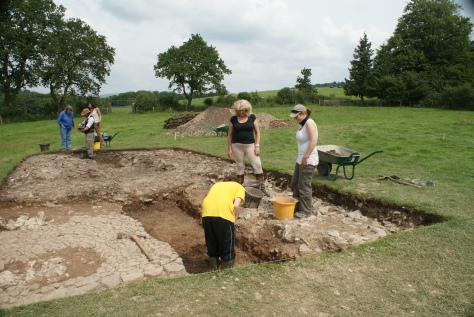 To our suprise (and delight) we stumbled upon a stone which we hoped was one of the foundations stones left behind when Paxton’s workers were removing stone for re-use elsewhere. 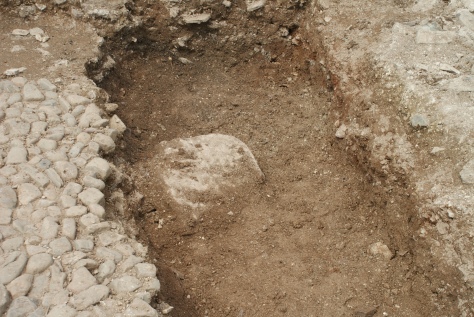 A stone found in the robber trench

Further excavation work continued in the second part of the trench where Ed and his team continued digging out the fill (earth) of the robber trench. A good deal of progress was made as they worked their way down through more layers of soil. 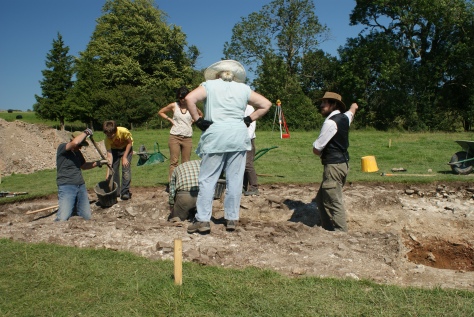 As Sir Mortimer Wheeler rightly said “archaeology is destruction”; as such we have to carefully record all the archaeology that we dig up. This involves context sheets (as mentioned before) and the drawing of plans (a representation of the features in the trench) and section drawings (so we can see layers of archaeology in trench edges etc). It is a time-consuming but necessary procedure and we spent most of the morning doing it!

A plan of the features in Trench 1

You can see the sondage that we dug out of the robber trench (mentioned before) drawn on the plan above with hashes showing the angle at which the features are sloping. The dash-dot lines drawn on the plan represent cuts (edges of holes such as the sondage) that we have made as opposed to the edges of cuts that were made by people in the past (ones which have since filled up with soil which we have then removed).

Another important part of the archaeological process is the washing of any finds that we have uncovered. Everything is washed apart from any metal objects and anything that might be damaged by washing. Generally we use toothbrushes and water to wash off any soil which is left on the objects.

In the afternoon we began removing the remaining soil from the robber trench hoping to find some evidence of foundation stones. By the end of the day we had removed about half of the soil and found lots of wall plaster, some glass and lots of anthracite but not much else. See below for an ‘end of the day’ photograph.

Progress by the end of the day

Remember, we have daily tours at 2pm – meet at the Great Glasshouse at the Botanic Garden!

The tent was alive this morning! As we walked across the field we breathed a sigh of relief when we saw it there and the small patches of blue sky made us feel more positive about digging (no rain makes for happy archaeologists).

Today we started digging a sondage (a section through a feature) through the robber trench – we wanted to see whether there was anything at the bottom of the trench. We were hoping to find foundation stones or something which would relate to the original house. Unfortunately there were no foundation stones as they had all been removed for use elsewhere on the estate, however we did find many pieces of wall plaster which would have faced the walls, probably in the portico.

A piece of wall plaster found in the robber trench sondage

Also in this sondage we found some a few lumps of purple stone (similar to that visible at the stable block in the estate) which is thought to have been used to accentuate the exterior features of the house. Evidently any stones which were suitable to be re-used had been removed so that only small useless pieces remain.

At the bottom of the sondage we encountered subsoil, the soil deposited by geological processes which underlies everything before bedrock, which has no archaeology in it. After the sondage was completed it is necessary to record the context (each different layer of soil and each feature is a ‘context’ and each has its own identifying number called a context number) on a form called a context sheet. This is required so that the archaeology is recorded by description as well as photograph. 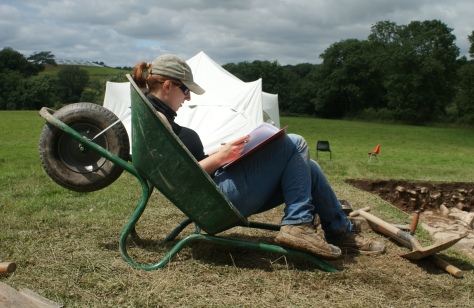 The rest of the team was working on removing the top layers of the robber trench in the east end of the trench prior to removing the majority of the soil in it.

So, we left site with slight suntans (or were they mudtans) feeling positive about our progress. Hopefully Friday’s weather will be fine too! Keep tuned for more updates! 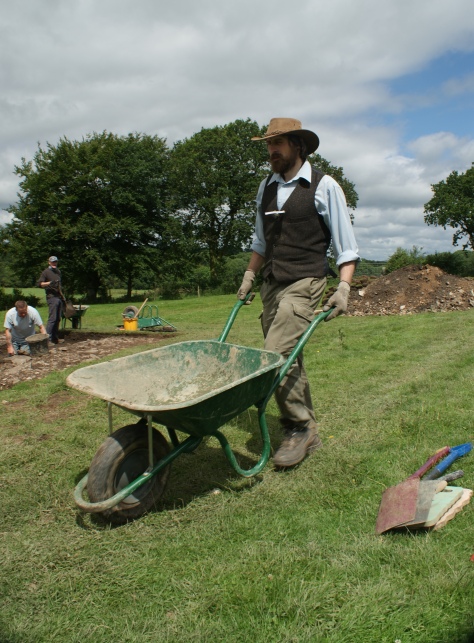 Arrival on site greeted us with a collapsed tent which resulted in various shades of hilarity whilst the site supervisors attempted to hold up the tent by hand. It seems that this wonderful summer weather we’re getting wants us to stop digging!

Eventually though we managed to get the tent standing again (with help from the Botanical Garden’s maintenance staff) and we could get back to work!

The first thing we did was to finish removing the earth from the north 50cm extension of the trench. Under this earth we found more cobbles extending from the cobbles found last year.

Cobbles found under the extension area

Under the west extension area we found a layer of red clay which had inclusions of mortar which would have been deposited during the demolition of Middleton Hall by Paxton in the 19th Century.

Within the soil below the turf which was removed on Monday were various finds including a screw top paint tube (image below), some more pottery sherds and some glass including a lovely piece of chunky dark green bottle glass (also pictured below). 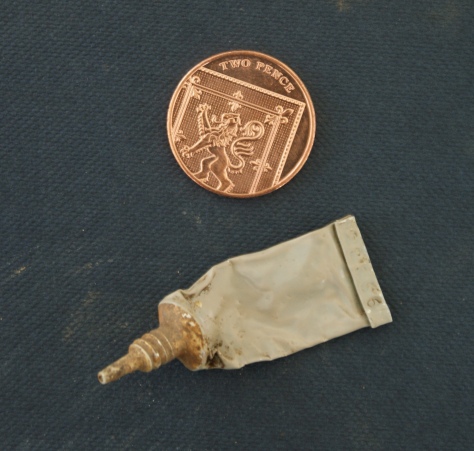 Paint tube – do you know anything about the development and/or seriation of paint tubes? If so, let us know! 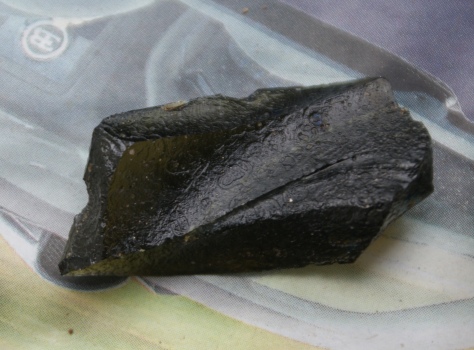 Dark green bottle glass, about an inch and a half long

As we were removing the last part of the trench extension we discovered some eggshell blue tile, identified as wall tile (because it is so thin), which is the first evidence we have found this year of internal decoration. 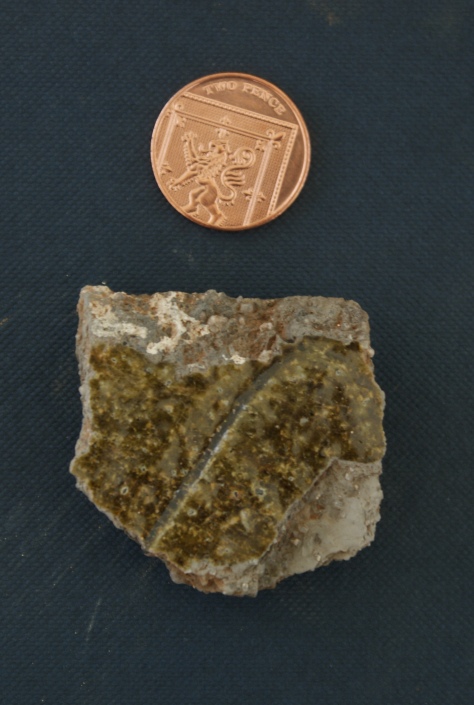 So, following a great day’s work we ended up with a clean and tidy trench. The suspected robber trench (a ditch left behind when a wall has been removed so stone can be re-used elsewhere) continues all the way through the trench and presumably beyond. A lot of work was completed and we all left site hoping that the tent would stay standing this time!

This was our day off!

And because of this we can’t talk much about what we found today… Mainly because we didn’t dig, therefore we didn’t find anything. So, here’s a pretty picture of the Botanical Gardens;

Dragonfly and the Glasshouse

The morning came and greeted us with rain, and lots of it. Almost horizontal rain.

So after an hour or so the rain abated slightly and, although the trench was very soggy and muddy, we could get back to work! We continued to remove more of the 50cm extension of the trench on the west and a further 5m by 5m square of trench was de-turfed (you can see all of this in the image below.)

Extending the trench and de-turfing

A couple of finds cropped up – some china (pictured below), window glass, green bottle glass and a few iron nails.

By the end of the day everyone was covered in mud and soaked to the bone – it seems that waterproofs aren’t waterproof in the Welsh rain. But we got a lot of work done!